AseanBusiness staffbtnews@sph.com.sg@AseanBusinessSG
An auxiliary police officer inspects plastic waste inside cargo containers before it is sent back to the country of origin in Port Klang, Selangor, Malaysia, 28 May 2019. Malaysia will ship 450 metric tons of contaminated plastic waste back to the countries of origin said Yeo Bee Yin today on 28 May. The waste came from Australia, US, Canada, Saudi Arabia, Japan, China, Spain and Bangladesh.
EPA-EFE/FAZRY ISMAIL
SEPTEMBER 23, 2019 - 3:50 PM

Global flows are shifting toward Asia on seven of eight dimensions namely trade, capital, people, knowledge, transport, culture and resources according to the latest study by McKinsey Global Institute. The only flow that has declined is waste (environment).

From 2007 to 2017, Asia's share of global goods trade rose from 27 to 33 per cent, of global capital flows from 13 to 23 per cent, of worldwide patents from 52 to 65 per cent (although its share of IP charges has remained constant at around 25 per cent), and of global container-shipping traffic from 59 to 62 per cent, according to the report. As part of efforts to reduce inflows of global waste - to better cope with the waste generated within the region - China unveiled a "national sword" policy at the start of 2018 that 2018 that banned the import of most plastics and other materials for recycling processors that have handled nearly half of the world’s recyclable waste over the past 25 years.

Since this ban, Malaysia, Thailand, and Vietnam have taken over as chief waste importers although these roles may shift in the next several years noted MGI. 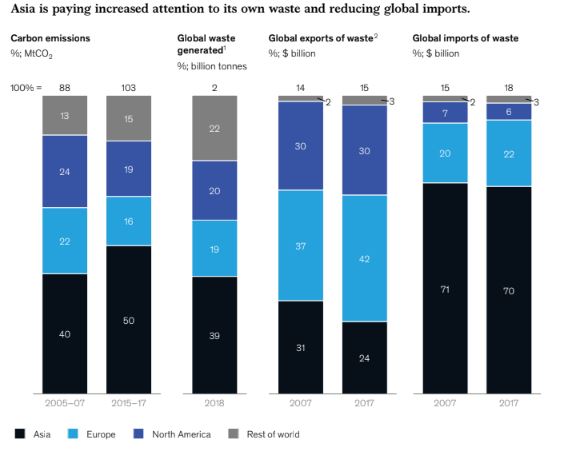