Friday, October 16, 2020 - 05:50
Uma Deviumadevi@sph.com.sg@UmaDeviBT
Annabeth Leowleowhma@sph.com.sg@AnnabethLeowBT
GAYLE GOHgaylegoh@sph.com.sg
4 -min read
Listen to this article
Thai anti-government protesters at Ratchaprasong shopping district in Bangkok on Thursday. UOB (Thai) closed six of its 81 Bangkok branches on the same day, as they are in this area.
PHOTO: EPA-EFE

IT'S still mostly business as usual for Singapore companies in Thailand, despite tightening emergency regulations amid mass demonstrations.

But companies are keeping a close eye on a situation that analysts warn poses downside risks to the economy and stocks - even as punters could buy on the dip.

While the Thai government's latest declaration of a state of emergency in Bangkok is expected to affect asset prices and company operations, analysts and companies polled by The Business Times (BT) have suggested that there should be no need to over-react.

As protesters took to the streets in Bangkok, the Thailand bourse suffered. The Stock Exchange of Thailand shed 1.7 per cent or 21.03 points to end the day at 1,242.96.

But, despite the dent in investor interest, Nirgunan Tiruchelvam, head of consumer equity research at Tellimer, told BT that "prime buying opportunities" are likely to surface over the next three to four days.

He recalled how Thailand has had 12 coups since it became a constitutional monarchy back in 1932, and has "since progressed".

Mr Tiruchelvam said: "Thailand is a developing country with a developed world cost of capital, and that gives a lot of Thai companies a massive advantage versus other players in the region."

Not everyone shares the same optimism.

"Investors are justifiably spooked," OCBC economist Howie Lee told BT, citing a fall in domestic and foreign spending during earlier protests in Thailand in 2013. "Another layer of uncertainty is the last thing the Thai economy needs at this stage. There is no telling how long the political noise may take to resolve but the longer it drags on, the larger the hit private consumption and investments will have to take." 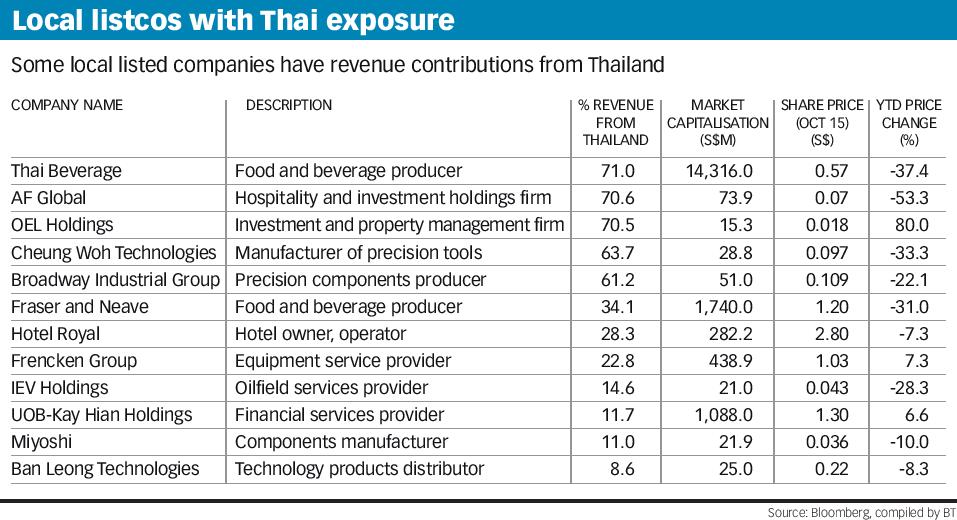 The Bank of Thailand has already pencilled in a record economic contraction of 7.8 per cent in 2020, while international visitor figures were recently projected to drop to 6.7 million for the full year, down sharply from 39.8 million in 2019.

Thai listcos and Singapore companies that do business in Thailand are likely to suffer a dual impact in operations and share price performance, Mr Tiruchelvam cautioned - although he added that the impact will be uneven.

According to Mr Tiruchlevam, the food and beverage company's spirits segment is unlikely to be affected, but its beer business could suffer - due to the protests, as well as the pandemic, which has stalled the country's tourism industry.

Yet, despite the challenges, Mr Tiruchelvam is advising investors to buy certain stocks on dips. ThaiBev is one of them. While the counter lost some 1.7 per cent on Thursday, he said it should warrant investor interest now given its "excellent value".

"I would urge investors to accumulate stocks such as ThaiBev which have withstood far worse than the current state of emergency. It's a solid company with a steady stream of revenue."

Tech manufacturers such as Frencken Group, Miyoshi and Cheung Woh Technologies "will not suffer too much" either, as their supply chains can "withstand pressures of this nature", he added.

Otherwise, investors should watch Thai stocks that might be set for a rebound - such as Minor International, the largest hotel counter in Thailand, which has shed some 44.5 per cent thus far this year but "could be one of the beneficiaries if tourism returns", Mr Tiruchelvam said.

Meanwhile, it's still business as usual for various Singapore companies operating in Thailand - though they also indicated to BT that they are monitoring the situation. These include Frasers Property, which manages three serviced apartments in Bangkok, and OCBC, which has one bank branch in the Thai capital.

Albert Phuay, chairman and chief executive of electronics parts distributor Excelpoint Technology, said: "It is still too early to tell. In our industry, we have yet to see a big impact." Excelpoint has a sales office in Bangkok.

Meanwhile, United Overseas Bank (Thai) closed six of its 81 Bangkok branches earlier on Thursday, as they are in the Ratchaprasong area where rallies are being held.

Employees have been told to avoid areas where political rallies might take place and the lender is preparing for all employees to work remotely if the need arises, a spokesperson told BT. UOB has 153 branches in Thailand in all.

THE lack of a major catalyst like the Kuala Lumpur-Singapore High Speed Rail (HSR) project which was terminated on...

THE termination of the Kuala Lumpur-Singapore High Speed Rail (HSR) project is a lose-lose situation for Singapore...

Get the latest on Asean and business news