ASIAN stock markets tumbled on Tuesday, taking their cue from a Monday night sell-off in Europe and the United States.

European markets were showing signs of recovery as the Asian trading day drew to a close, but investor sentiment has clearly taken a hit in the last week, as the number of new coronavirus cases in several countries and regions shows no sign of abating.

The Singapore market ended the day down 0.9 per cent; Shanghai and Hong Kong markets sank by about 1.3 per cent and 1 per cent respectively.

Over the last five days, Wall Street indices have taken a beating. The Nasdaq and S&P 500 each fell by 3.7 per cent, while the Dow Jones Industrial Average lost 3.5 per cent.

US: Stocks gain on stimulus talks, shrugging off Trump-Biden brawl

There has been particular selling pressure among the tech stocks, which had been leading stock market rallies since the beginning of the pandemic, as economies moved into remote working arrangements and lockdowns.

Share prices of the local tech manufactures had bucked the market's downward trend since Singapore's "circuit breaker" kicked in. The FTSE ST Technology Index, which tracks the performance of technology-related companies quoted on the Singapore market, has risen 18.7 per cent since end-March. In comparison, the benchmark Straits Times Index (STI) is down 0.7 per cent, and the FTSE ST All Share Index, which represents 98 per cent of Singapore's market capitalisation, is up just 2 per cent.

But in the last month, the technology index has come under pressure. It has fallen three per cent, while the STI and All Share Index have come down by 2.6 per cent and 2.1 per cent respectively.

Meanwhile, some of the local market's hottest counters - the likes of AEM and Hi-P International - are now down on a month-on-month basis. 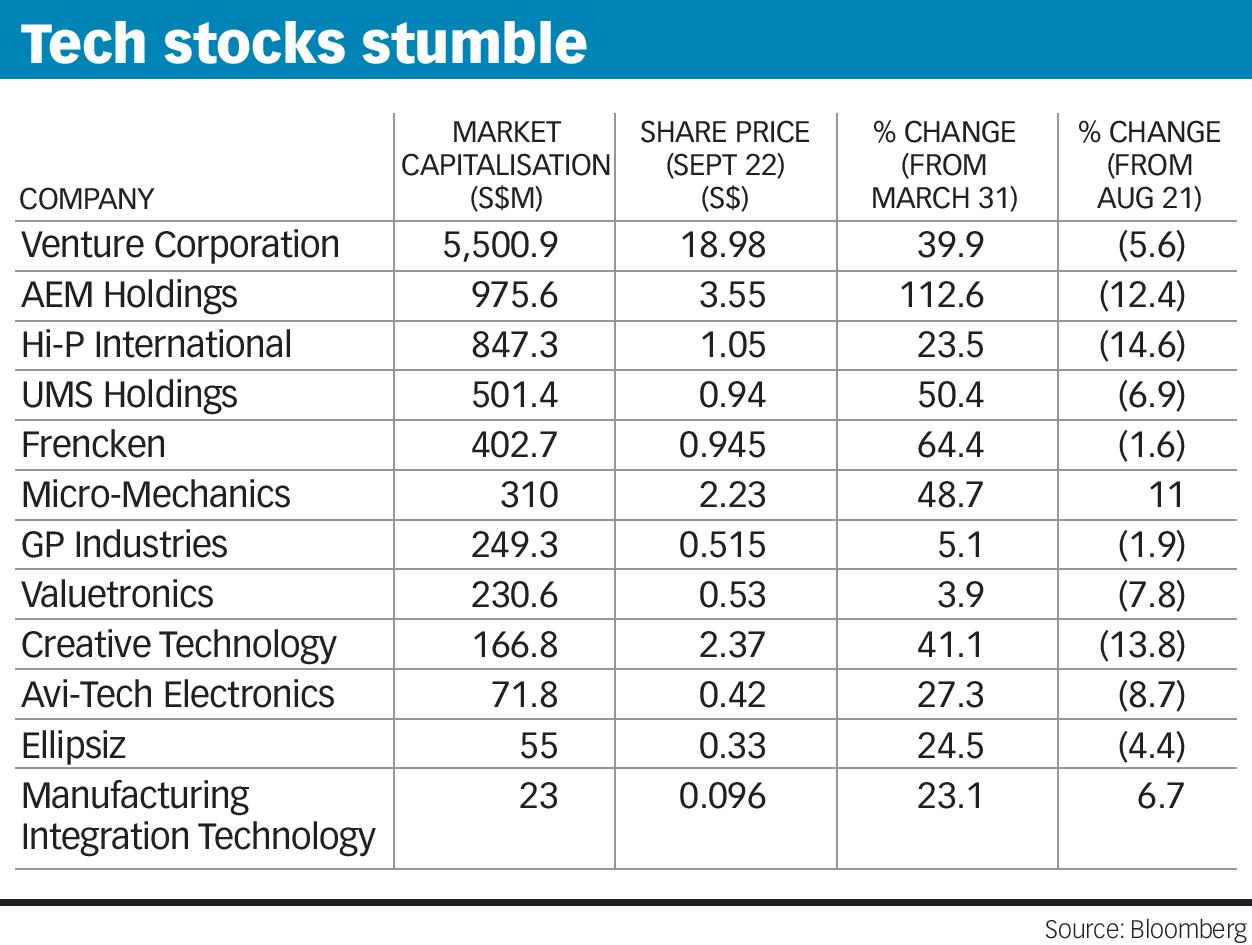 Market watchers say the sell-off may be related to a general repositioning among investors globally, as they move out of the early pandemic plays.

The Nasdaq's five tech giants - Facebook, Amazon, Apple, Netflix and Alphabet (collectively known as the FAANG stocks) - have all contracted by between 0.3 per cent and 12.5 per cent in value over the past month.

UBS regional chief investment officer Kelvin Tay told The Business Times that the Wall Street tech sell-off is a result of "overcrowdedness in terms of investor positioning" as well as positive developments on the vaccine front.

He said: "It will probably trigger a rotation out of the tech sector or growth sector into the value sector. With the vaccine in place, your reliance on tech will probably not be as heavy as before; therefore, old value sectors will come into play a lot more."

Terence Wong, chief executive of boutique fund Azure Capital, said that while the local tech stocks do not exactly mirror the performance of the Nasdaq-listed FAANG stocks, there is some correlation.

"Although the local sell-off is really stock-specific, it's pegged very closely to what's going on in the US as many of the tech counters move in sync with what's happening over there."

Jarick Seet, head of Singapore small- and mid-caps at RHB Research, said a worsening of trade tensions and a reigniting of the trade war between US and China could also be playing a role.

But the local tech stocks' valuations could be a saving grace. Mr Wong of Azure noted that while Nasdaq-listed counters are "raking in a lot of money", their price to earnings (P/E) ratios indicate "very stretched" valuations.

The FAANG stocks, for instance, have P/E ratios ranging from 30.3 to 113.8 times. In comparison, local companies are trading in the "high single digits to mid-teens" range, he said.

Looking ahead, Azure's Mr Wong said global equities could decline further in the near term. This, unfortunately, spells trouble for Singapore tech companies. Yet, the longer-term outlook remains sound for the sector.

"On a longer-term basis, there are definitely investment merits for these companies, and they have grown a lot stronger over time in terms of factors like balance sheets," he said.

RHB's Mr Seet said that the outlook for semiconductor plays has remained strong despite the pandemic, but added that other segments should enjoy a lift as well, with the easing of lockdowns and restrictions.

Mr Tay of UBS said that some trends that have been brought about by the pandemic appear to be "here to stay", prompting him to take a positive view of the outlook on the global tech sector.

Although he said the sell-off is unlikely to lead to a "more sinister decline" for tech counters, he is advising investors with over-exposure in FAANG counters to "diversify into the broader tech space" such as 5G and semiconductors, which have "tremendous potential" in the next five years or so.

A SINGAPOREAN man now faces a total of 11 charges in relation to scandal-hit German payments firm Wirecard, after an...

Tokyo: Trading halted for the day after glitch

[TOKYO] Trade on Tokyo's stock exchanges was halted for the whole day on Thursday after a technical glitch forced...

[HONG KONG] Asian markets got the new trading quarter off to a stuttering start Thursday with Tokyo hit by a...

Singapore to allow visitors from Australia, Vietnam from Oct 8