Vivienne Tayvtay@sph.com.sg@VivienneTayBT
Singapore's official growth forecast for 2020 has reached negative territory, with a further downgrade to between -4 per cent and -1 per cent.
PHOTO: ST FILE

SINGAPORE'S official growth forecast for 2020 has reached negative territory, with a further downgrade to between -4 per cent and -1 per cent.

This is a worse outlook from the -0.5 per cent to 1.5 per cent range the Ministry of Trade and Industry (MTI) posted in February.

"Since then, the Covid-19 outbreak has escalated and led to a significant deterioration in the economic situation both externally and domestically," MTI said on Thursday morning.

The last time Singapore saw negative full-year GDP growth was nearly two decades ago in 2001 - during the Internet dotcom bust - where a 1.1 per cent contraction was recorded.

Before that, Singapore's GDP was negative in 1998 at -2.2 per cent during the Asian financial crisis and -3.2 per cent in 1964, the year when racial riots occurred.

Meanwhile, a 4.5 per cent growth in GDP was recorded in 2003, the year of the severe acute respiratory syndrome outbreak.

The most recent downgrade takes into account the weaker-than-expected performance of the Singapore economy in the first quarter of 2020. It also accounts for the sharp decline in the external and domestic economic environment since February.

The wider forecast range accounts for heightened uncertainties in the global economy, given the unprecedented nature of the novel coronavirus outbreak and public health measures taken in many countries to contain the outbreak.

Following MTI's downgrade, economists have slashed their 2020 GDP forecasts, with a contraction for 2020 unavoidable and recession imminent.

Selena Ling, OCBC's head of treasury research and strategy, said Singapore's Q1 2020 GDP growth estimates is like "the canary in the mineshaft" - warning of further economic pain to come for other Asian economies.

Singapore's revised growth forecast comes as the economy contracted 2.2 per cent year-on-year in the first quarter of 2020, according to MTI's advanced estimates.

On a quarter-on-quarter seasonally adjusted annualised basis, the economy shrank 10.6 per cent, pulling back sharply from 0.6 per cent growth the previous quarter.

The projected 2.2 per cent contraction marks the worst GDP year-on-year contraction in over a decade since Q1 2009 and the largest quarter-on-quarter slippage since Q3 2010.

DBS senior economist Irvin Seah called this "the worst year-on-year decline since the global financial crisis". The latest set of figures also confirmed fears that a recession is "inevitable".

Singapore's services-producing industries contracted 3.1 per cent year-on-year from 1.5 per cent growth in the previous quarter. A sharp decline in tourist arrivals and a fall in domestic consumption as a result of the novel coronavirus situation saw sectors such as air transport, accommodation, food services and retail trade sectors shrink.

The services sector accounts for two-thirds of GDP employment. If it falls, the economy follows, Mr Seah said.

"Even an improvement in the manufacturing sector in the coming quarters will not be enough to offset the drag. This will be a services-led full-year recession," he added.

The manufacturing sector contracted 0.5 per cent year-on-year, moderating from the 2.3 per cent contraction in the previous quarter. The sector was weighed down by output declines in the electronics and chemicals clusters, which more than offset output expansion in the biomedical manufacturing and precision engineering clusters.

The construction sector shrank 4.3 per cent year-on-year, reversing from 4.3 per cent growth in the previous quarter. The sector was weighed down by a decline in private-sector construction activities, supply chain disruptions and delays in the return of foreign workers as a result of lockdowns and travel restrictions by other countries in relation to the Covid-19 outbreak.

The wholesale trade and other transportation and storage sectors contracted due to the fall in external demand as well as supply chain disruptions.

However, the information and communications sector, along with finance and insurance, posted positive, albeit more subdued growth, MTI said. 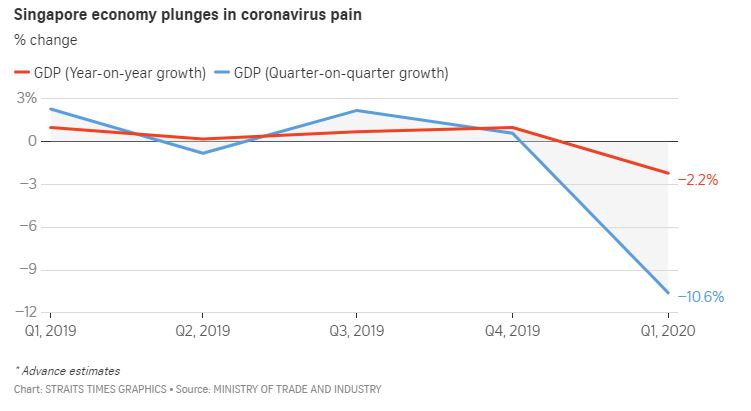 UK Foreign Minister in charge, will decide on lockdown measures

SPH's H1 net profit down 9.3%, management warns of further disruption due to Covid-19

SINGAPORE Press Holdings (SPH) reported a 9.3 per cent fall in net profit to S$77.6 million for the half-year ended...

STI builds on strong start to the week, rises 4.1% on Tuesday

Singapore's Straits Times Index (STI) built on its positive start to the week, finishing the Tuesday session up 101....