Fiona Lamfiolam@sph.com.sg@FionaLamBT
Singapore had the highest inbound M&A value in the region, with US$2.7 billion across 27 deals, on the back of Grab’s US$706 million investment from Mitsubishi UFJ.
ST FILE PHOTO

MERGERS and acquisitions (M&A) in South-east Asia slowed down in the first six months of this year, generating about US$29 billion across 149 deals, most of which came from the January-March period.

This was a 12.5 per cent decrease in value compared with the corresponding period last year, which recorded US$33.1 billion across 186 deals, according to data from M&A intelligence service Mergermarket.

The decline in dealmaking activity came despite the region recording its highest first-quarter deal value on Mergermarket record (since 2001), as the novel coronavirus pandemic’s impact on M&A activity fully emerged only in the second quarter.

In the first three months of this year, South-east Asia racked up US$25.2 billion across 86 deals, before dealmaking “ground to a halt” in April and May as several countries were under strict lockdowns in response to the Covid-19 outbreak, Mergermarket said. In Q2, there were 63 deals amounting to a mere US$3.8 billion.

It added that the second half of the year could continue to see subdued activity, as corporates are expected to retain higher amounts of cash on their balance sheets to weather the uncertain economic conditions.

Singapore was the largest M&A market within South-east Asia in H1 2020, recording US$11.88 billion across 41 deals.

This translated to a 25.9 per cent drop in deal value as well as 23 fewer deals, compared with the year-ago period’s US$16.03 billion value across 64 deals in Singapore, Mergermarket told The Business Times.

The second-largest market in the region was Thailand with US$11.1 billion from 18 deals. This deal value was largely driven by Thai conglomerate CP Group’s US$10.6 billion acquisition of Tesco’s businesses in Thailand and Malaysia. The acquisition was announced in Q1 2020, and marks the largest deal in the Asia-Pacific for the first half of the year, Mergermarket said. 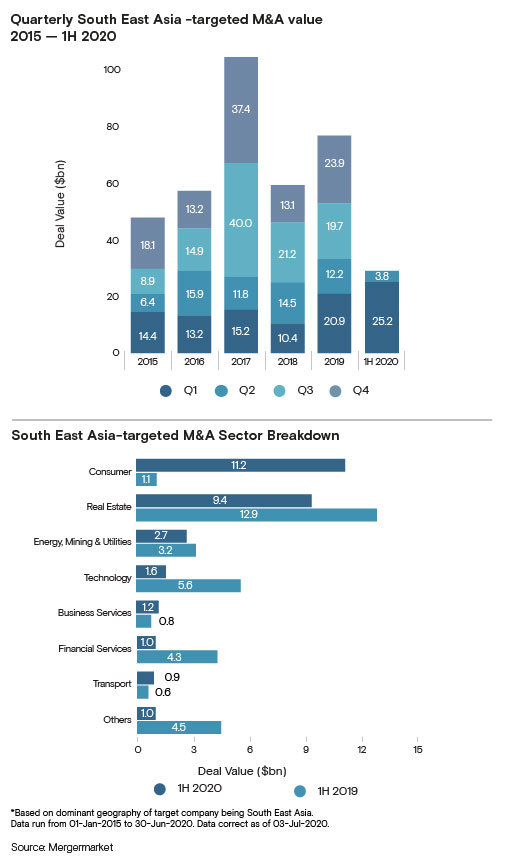 Intra-regional activity remained strong and dominated the South-east Asian M&A market by value, with US$23.9 billion across 85 deals in the first six months. This is also 20.2 per cent higher by deal value compared with the year-ago period.

However, inbound dealmaking plunged by 61.7 per cent by value to US$5.1 billion from 64 deals in H1 this year, down from US$13.2 billion across 88 deals in the corresponding period last year.

Singapore had the highest inbound M&A value in the region, with US$2.7 billion across 27 deals, on the back of Grab’s US$706 million investment from Mitsubishi UFJ. Mergermarket pointed out that the Grab investment was South-east Asia’s largest inbound deal in H1 2020.

Vietnam came in second, bringing in US$872 million in overall inbound investment during the first half of this year. This was largely driven by Vinhomes’ US$651 million investment from a consortium that included US private equity giant KKR and Singapore state investor Temasek Holdings.

In contrast, outbound activity from South-east Asia stayed robust despite the coronavirus crisis, generating US$15.1 billion across 49 deals. By value, this is about 62 per cent higher than H1 2019’s US$9.3 billion across 71 deals.

South-east Asia accounted for some 11.5 per cent of Asia-Pacific’s overall M&A value, which totalled US$250.8 billion from 1,734 deals in the first half of this year.

Private equity (PE) buyouts, meanwhile, started to pick up pace in Q2 this year, climbing to US$1.27 billion from just US$67 million in Q1 for South-east Asia.

Most of the PE investments in H1 2020 headed to the real estate sector, which drew US$1.12 billion across three deals.

“The materialisation of a number of deals currently under negotiation could be delayed due to swings in target valuations.”

175 new Covid-19 cases in Singapore, including 1 in the community

[SINGAPORE] There were 175 new coronavirus cases confirmed as of Sunday noon taking Singapore's total to 55,104.

[JOHANNESBURG] Chinese and Spanish developers that want to build Africa's biggest hydropower plant in the Democratic...