THE Urban Redevelopment Authority's (URA) flash estimate for the second quarter of 2020 shows that the overall price index for private homes shrank 1.1 per cent over the preceding quarter.

This follows a 1 per cent drop in Q1 this year.

Year on year, the index is down 0.3 per cent, according to the URA flash estimate released on Wednesday morning.

Prices of non-landed properties eased 0.6 per cent quarter on quarter in Q2 after slipping 1 per cent in the previous quarter.

Giving a breakdown by region, the URA said that prices of non-landed homes in the prime areas or core central region (CCR) dipped 0.1 per cent in Q2, a much smaller decline compared with the 2.2 per cent drop in the previous quarter.

However, in the city fringe or rest of central region (RCR) , prices fell 1.9 per cent quarter on quarter in Q2, a bigger drop compared with the 0.5 per cent decline in the previous quarter.

In the suburbs or outside central region (OCR), prices remained unchanged in Q2, compared with a 0.4 per cent decline in the previous quarter.

The URA also said that prices of landed properties fell 2.7 per cent quarter on quarter in Q2, following a 0.9 per cent drop in the previous quarter.

The flash estimates are compiled based on transaction prices given in contracts submitted for stamp duty payment, and data on units sold by developers up to mid-June. The statistics will be updated on July 24, when the URA releases its full set of real estate statistics for the second quarter. 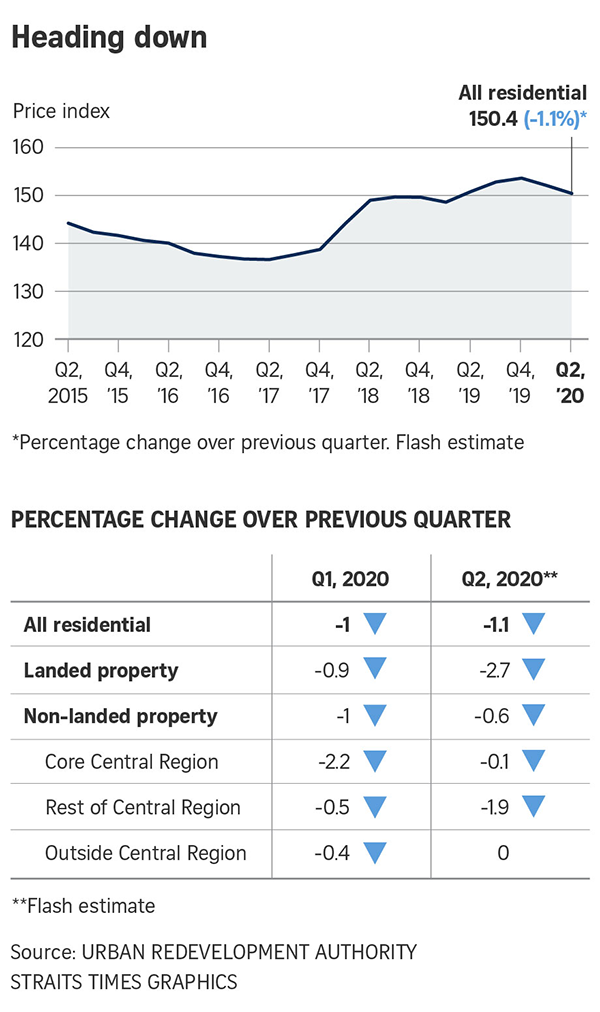 Property consultants attribute the drop in private home prices in Q2 this year largely to the "circuit breaker" partial lockdown to curb the spread of Covid-19. From April 7 to June 18, showflats were closed and property viewings disallowed. These restrictions resulted in lower transaction volumes, which in turn led to the 1.1 per cent quarter-on-quarter drop in URA's benchmark overall private home price index.

Observing that the OCR was the only market segment with no price change in Q2 over the previous quarter, ERA Realty head of research and consultancy Nicholas Mak said: "This could be due to the resilient demand for properties in the OCR primarily from HDB upgraders."

"These relatively new flats could be sold on the resale market and the owners could upgrade to private housing," Mr Mak added. Moreover, suburban condos come with lower price tags and are more affordable, compared with real estate in the central region, he noted.

Mr Mak predicts a 3 to 6 per cent drop in URA's overall private home price index for the whole of 2020.

OrangeTee & Tie head of research and consultancy Christine Sun expects the index to post a full-year decline of 3 to 5 per cent.

Huttons Asia research director Lee Sze Teck said: "We think the property market will stabilise from Q3 2020 and we think prices will ease around 3 per cent in 2020."

Knight Frank Singapore's research head Leonard Tay said that while developers will continue to offer discounts in order to reignite home buying interest that began in May, overall price declines are likely to be moderate.

"Therefore, in the second half of 2020, with the phased relaxation of restrictions and some measure of human interaction, transaction volumes should increase. Nevertheless, URA's overall private home price index is likely to drop by about 5 per cent this year, due to recessionary pressures affecting all sectors of the economy," he added.

Demand down, costs up, but builders will rein in bids

[HONG KONG] HSBC Holdings pledged to boost investments in China to capture more wealth and retail clients even as...

THE Accounting and Corporate Regulatory Authority (Acra) has rejected BDO's application to resign as auditor of...